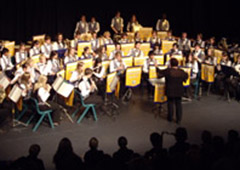 Membership of the ACT Senior Concert Band (SCB) is open to students of ACT government high schools who play wind, brass and percussion instruments and who are in Years 9 to 12 and who successfully audition. Membership of the SCB is for one year only and all places are declared vacant at the end of each school year. The SCB rehearses each Wednesday night of school term (not in the holidays).

Current members may reaudition for membership in next year's band, but will receive no special treatment except where 2 applicants rank equally at audition. In that situation the current member will receive preference if their behaviour has been exemplary and if their attendance record is good.